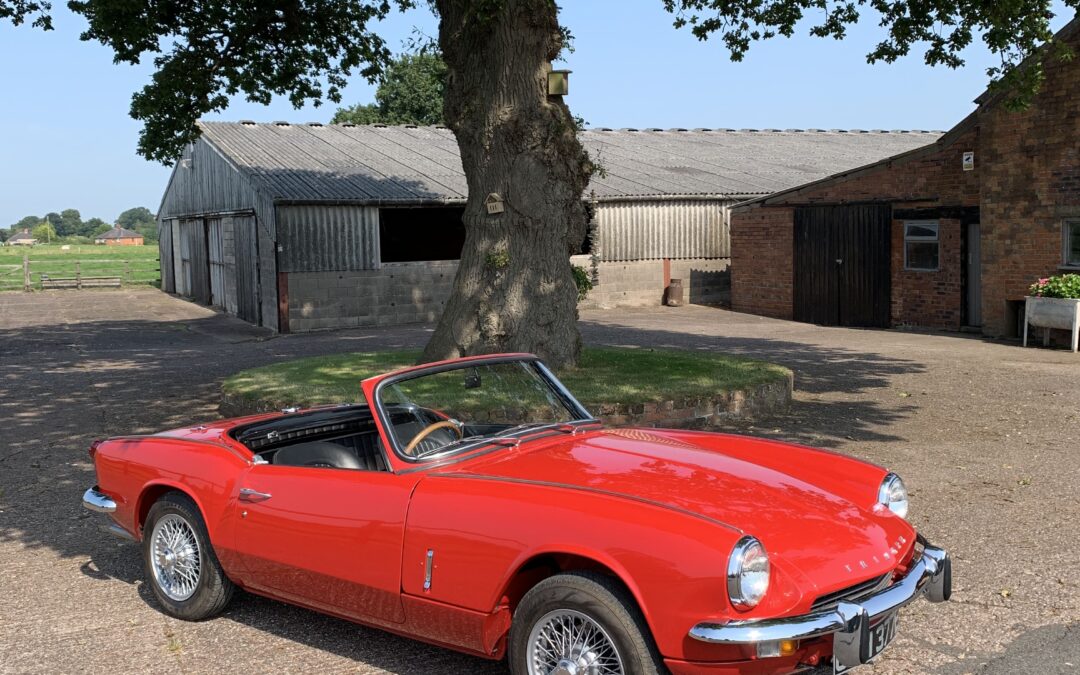 Manufactured between 1962 and 1980, the British made Triumph Spitfire was introduced at the London Motor show in 1962. This 2-seater convertible, front-engined, rear wheel drive sports car was designed to rival the Austin Healey Sprite in the small sports car marketplace.

The designer of the Triumph Herald, Giovanni Michelotti, styled the bodywork and used a smaller version of the Herald’s body-on-frame chassis as opposed the monocoque construction of its competitors. The bonnet and wings were constructed as a one-piece unit which hinged at the front and allowed much better access to the engine. It also featured wind up windows.

The Spitfire’s introduction was delayed due to the financial troubles of Standard Triumph in the early 1960’s, and subsequently the prototype was left under a dust sheet in the corner of the factory. Once Leyland Motors had taken over, they quickly approved production.

The Triumph Spitfire was an inexpensive small sports car and had a very basic trim including rubber mats and a large plastic steering wheel, however, at the time it was deemed a pretty comfortable car due to its winding windows, instrument cluster and exterior door locks.

The Mark III, introduced in March 1967, was the first major facelift to the Spitfire. The front bumper was raised in response to new crash regulations, and the front coil springs were slightly raised. Slightly revised bonnet pressings were carried over. Rear overriders were deleted, and bumper mounted reversing lights became standard (initially as two separate lights on either side of the number plate, latterly as a single light in a new unit above the number plate). The interior received a wood-veneer instrument surround and a smaller, 15-inch, wire spoked steering wheel. A folding hood replaced the earlier, more complicated design. For most of the Mark III range, the instrument cluster remained centre-mounted (as in the Mark I and Mark II), easily accommodating right-hand and left-hand drive versions.

This particular car has been lovingly restored by the previous owner, who was a retired auto engineer, between 2015 and 2017. The car was restored for his personal enjoyment but due to a house move he was no longer able to keep it garaged, hence the sale. We were informed it has received a complete rebuild where the bodywork was stripped back to metal and repainted in Signal Red, and the chassis was cleaned and repainted in chassis black. The engine was stripped and re-engineered, the cylinder head and block machined, the crank reground, painted and reassembled using new gaskets and seals. The car was then rebuilt using restored components or new if needed. The car received new carpets, upholstery and a wooden steering wheel. The wire wheels are in a beautiful condition.
Since 2017, the car has been kept in a personal collection.